An Interview with Resident Monique Jones 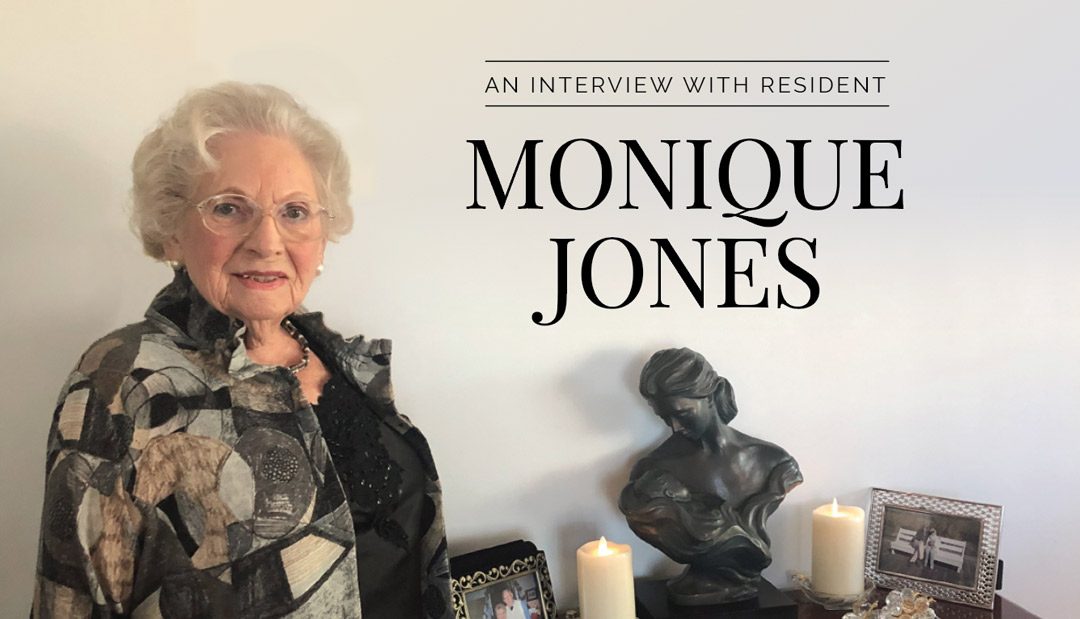 In northeastern France there is a city named Verdun that looks very idyllic. Its streets are lined with beautiful terrace homes that have storefronts on the first floors and apartments or homes on the others, similar to how Beaver’s Third Street is configured. The Meuse River, a major European waterway, runs right through the city and is lined with parks, walkways, and trees.

At address 39 Quai de Londres sits a colorful cafe named L’inconnu. The cafe has a patio on a brick street with bright green, yellow, orange, and red chairs. Patrons can enjoy a refreshing morsel while they watch boats float up and down the river.

Many years ago, 39 Quai de Londres was the home of
now-Beaver-resident Monique Jones. She grew up there during a tumultuous time in our world – World War II.

Monique was born in March 1931 and was an extraordinary child who loved to dance and attend school before the war began. Sadly, when she was very young she suffered from a mysterious illness that caused her to spend a full year in bed.

While she was battling the illness, her family was battling with the idea that World War II was on the horizon. Her father was called to serve in the French army in the South of France. Shortly after, on May 16, 1940, the Germans attacked the French line of defense within an hour’s drive from Verdun.

Monique was still recovering from the illness, but she, her mother, and sister evacuated their home on June 11, 1940. They left with nothing but name tags, gas masks, and two small bags. The trio was able to purchase train tickets destined for Dijon, France, which was farther away from the fighting. The train they rode carried civilians as well as wounded soldiers who needed to get away from the front lines for treatment. The train moved slowly, and Monique watched as they passed the scenes of war: wounded soldiers, frantic civilians, and overall chaos.

During the journey, the train entered a small valley and when it turned a corner, the passengers were baffled to see a group of nuns and priests running toward them. The clergy ended up being Italian soldiers in disguise who were ambushing the train so they could attack the wounded French soldiers riding on it. Fighting and gunshots commenced, even within the train’s passenger cars. The civilians riding on the train abandoned it once the fighting was over and scattered in all directions.

Monique and her family decided to continue on to their destination of Dijon by foot. The train hadn’t taken them very far because of its slow pace so they had quite the journey ahead of them. They spent the next few days walking when it was light out and sleeping in whatever shelter they could find at night.

On the first night, they slept in a barn with hundreds of other evacuees. When dawn broke, they resumed their journey only to be terrorized by Italian forces once again. Warplanes flew over them and shot at them while they walked on the road. Monique and her family took shelter in a ditch and survived the attack; the person next to Monique in the ditch was not so fortunate. When the shooting was over, all they could do was continue on.

On the second night, they found an empty suburban house whose owners had fled the Germans. Monique said in her book WWII Through the Eyes of a Child, “The home was so pretty, an A-frame home, shaped with a solid chimney and pine trees in the front lawn. In the back were a stream and a garden full of roses and peonies….It made us feel safe, alive, it was home again…”

One day on their journey they heard the news that France had surrendered to Germany. They decided

to continue on to their destination anyway since they had already walked so far. When they arrived, German forces sadly told them to turn around and walk back home.

The trio began their approximately 155 mile journey back on foot. Walking back home was even worse as now they passed defeated and injured French soldiers, some who were being escorted to German camps. Monique said her family looked at every soldier, wishing to get a glimpse of her father, but also praying that they wouldn’t see him in such a hopeless situation.

On June 21, 1940, Monique, her mother, and her sister had finally made it home, ten days and almost 300 miles later. Although it was a long journey, it was just the beginning for Monique and her family. During the next four years of Monique’s life she and her family lived under occupation and experienced hunger, fear, sadness, and desperation along with love, kindness, joy, and hope.

Monique has written two books about her life. WWII Through the Eyes of a Child tells the story of her evacuation, home life in German-occupied Verdun, employment through NATO under General Eisenhower, marriage to an American soldier, and much more. The publication is available to check out at the Beaver Area Memorial Library under the title 39 Quai de Londres Verdun, France: the true story of Monique Raguet during the Nazi occupation of France.

Monique’s story is a tribute to the perseverance, strength, and courage one can find during times of struggle. Her story also demonstrates how even in times of unthinkable turmoil and injustice, we have one thing in common: our shared humanity. You’ll just have to read the book to learn more.

In Monique’s second book, she tells the story of her life after the war when she immigrated to Lancaster, Pennsylvania with her husband. She is currently writing her third book.

Monique recently moved to Beaver because it happily reminds her of her childhood home in Verdun. After all, with Beaver’s beautiful brick sidewalks, parks, charming cafes and restaurants, sounds of laughter and conversation from those dining outside or taking a walk, and view of the Beaver River, Beaver and Verdun may have more similarities than differences.