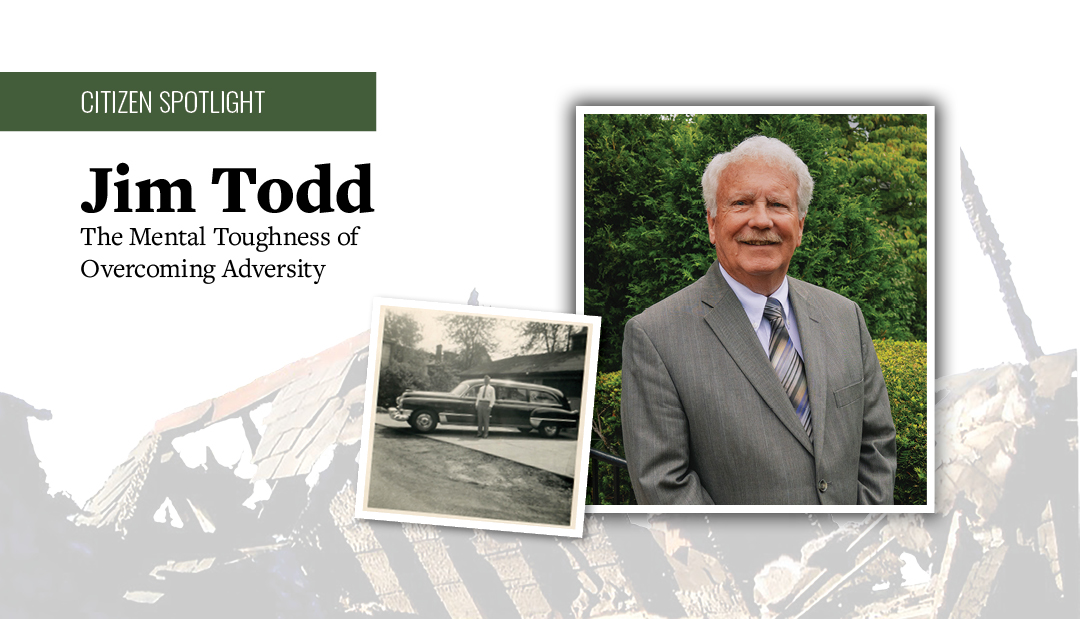 In a cruel twist of fate, after decades of business and community service leadership in Beaver, Jim Todd’s well-ordered world was crippled in flame and smoke when his historic Todd Funeral Home burned in 2005.

While the interior, second floor, and roof were badly damaged, the lower portion of the building was saved through the efficient work of fellow members of the Beaver Volunteer Fire Department and six other departments. These were people with whom Jim had fought blazes for years, never knowing he would need their help himself.

Jim was left with a smoldering building, more than $800,000 in damages, and the need to maintain trusted funeral management services as well as operate a bed and breakfast.

Unfortunately, insurance did not cover all the estimated repairs. Jim was faced with the decision of whether to rebuild and keep going or not. The daunting prospects may have crushed the soul of nearly anyone else not grounded in compassion for others, Beaver’s rich architectural heritage, and the genuine grit of mental toughness.

Jim’s personal history in fear management and overcoming adversity allowed him to come to a quick decision. He chose to move ahead with restoration, at the personal cost of several hundred thousand dollars, focusing on the exterior and first floor.

Jim also faced the investment of time in a grueling 18-month reconstruction process. This included regular 16-hour workdays overseeing contractors and finding alternative ways to serve grieving families. Friends, friendly competitors, and churches rallied to help. Jim used his own hands and wryly says that “I got good with a nail gun.” What resulted in late 2006 was a successful re-opening.

A longtime admirer, Beaver Fire Chief John Grosskopf, says that “What I’ve learned from Jim is to always be calm, take a step back, observe, think, solve, and then react.” Last year, after 45 years, Jim transitioned to honorary status at the fire department.

Jim’s commitment to mind over matter was developed at a young age. His father purchased the old Sheets funeral home in Bridgewater after World War II. It was relocated in 1954 to its current location on Third Street, purchased from the estate of its original owner, Vera Taylor Gailey. One of the firm’s most visible symbols over the years was its fleet of turquoise and black hearses which never failed to stand out.

Early-on, the funeral business included ambulance services. Starting at age 13, Jim regularly was called out with his father to aid the ill, injured, and dying and transport them for medical care, armed with only basic oxygen and First Aid supplies. On holidays, the Todds traveled to family dinners in the ambulance in case of emergency calls. He was given the responsibility of driving the ambulance at age 16. One can only imagine the horrors his adolescent eyes witnessed, the emotions his mind processed, and a lifelong empathy for the suffering of others that was established.

When his father was stricken with health problems in 1972, forcing him to step back from business, Jim stepped up into full active management at age 24. The funeral home has been in his steady hand now for more than half a century.

Jim’s exposure to others’ heartaches expanded when joining the town’s fire department in 1976. The count of fires he has helped fight cannot be calculated, nor can the degree of destruction he has seen.

In one fire at the Good residence at Fourth and Dravo Streets, he found himself rescuing treasured family photographs, knowing the irreplaceable emotional and spiritual value they represented. Another horrific inferno was the 1984 Ashland Petroleum plant explosion in Freedom, where he operated the firetruck’s aerial apparatus.

In 1995, Jim acquired an adjacent building to the funeral home. Over the next five years, he restored it to its original state, and turned it into a charming Victorian bed and breakfast. Since then, he has entertained guests from 48 states and 19 countries. He has hosted all sorts of guests, from authors, film crews, and judges to political candidates and wedding parties. Today, the B&B is beautifully decorated with hundreds of period antiques— among them are clocks, oil lamps, and “mustache” cups. A favorite antique on display at the funeral home is a telephone from the original Bridgewater facility, re-discovered in 2020 at the Antiques in the Woods festival. Jim says that “The Victorians had a theory that too much was not enough.”

In college, Jim learned the value of community involvement through his service fraternity. He has never stopped giving back. He has been active with the Kiwanis Club and Beaver’s Civil Service Commission, helping to recruit and vet potential candidates into stable, qualified police officers.

Today, the funeral home stands tall as an essential local landmark. It not only represents more than a century of Victorian elegance, but also Jim Todd’s unwillingness to surrender to adversity.