When I took Astronomy as a science elective in college, I thought it would be an easy “A” because I just loved the stars, moon and planets, and thought that I had a pretty extensive knowledge of them all. I could breeze through the text and take a few minutes studying the questions and answers at the end of each chapter.

However, as my professor described, Astronomy is one of the most difficult of the sciences to learn with more terms and definitions than any of the natural sciences. I loved the class, and it was certainly a challenge. 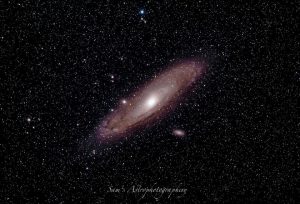 The Andromeda galaxy, also known as Messier 31 or M31, which is 2.5 million light-years from Earth.

Wikipedia’s definition of Astronomy goes something like this – Astronomy is a natural science that studies celestial objects and phenomena. It uses mathematics, physics, and chemistry in order to explain their origin and evolution. Objects of interest include planets, moons, stars, nebulae, galaxies, and comets. Relevant phenomena include supernova explosions, gamma ray bursts, quasars, blazars, pulsars, and cosmic microwave background radiation. More generally, astronomy studies everything that originates outside Earth’s atmosphere. Cosmology is a branch of astronomy that studies the universe as a whole.

Even given the difficulty of the class, my love for the absolute majestic beauty of a dark sky never waned, but now I possessed a much deeper understanding of the heavens above.

The Greeks, Egyptians, Chinese, Polynesians, and Mayans all observed the stars and constellations. Celestial navigation has been practiced for centuries, and is still used to ensure that our modern Navy can navigate the seas without the aid of satellites and other sophisticated electronic equipment. United States Navy quartermasters still to this very day use a sextant, which uses celestial objects to pinpoint their locations. I observed this first hand when I had the distinct privilege to serve in the United States Navy. One can always use the stars to navigate, just as the early explorers of the fifteenth century did.

So why do we keep looking up? Perhaps it’s from human hope or despair, or maybe for inspiration? It is a unique question that’s been asked for years throughout history.

I would be remiss if I did not mention one of the prettiest lyrical lines written by veteran Musicians and Composers Kenny Ascher and Paul Williams:

Who said that every wish
Would be heard and answered
When wished on the morning star?
Somebody thought of that
And someone believed it
Look what it’s done so far
What’s so amazing that keeps us stargazing
And what do we think we might see?

Maybe these lyrics help to explain it a little more. I know that when I see those billions of stars, something in me changes and our world seems much smaller and my problems much more insignificant. 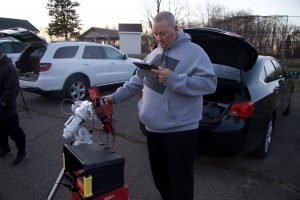 Sam Skirchak with his astro photography gear at a Star Party.

The Beaver County Amateur Astronomers Club has been in existence since the late 1960’s and early 1970’s. Although it has changed names, members, and leadership over the years, some of the original members still make occasional appearances and express their gratitude and exuberance to see that astronomy in Beaver County is very much alive and well!

Frank Marzano is the current BCAAC president and schedules all of the dates and times for the club’s “Star Parties,” which are usually held during new moon phases to ensure that we have the darkest skies necessary for optimal viewing. The largest factor in observing the heavens is having clear skies. As most know, our region here in Southwest Pennsylvania is near top of the list for areas with the fewest clear days in the entire country. However, we’ve been pretty lucky, and have had some epically clear skies on our scheduled nights for observation.

You don’t need a telescope to get a great glimpse of the unimaginable number of stars at night. Although having a rather inexpensive telescope or even binoculars helps to see the faint galaxies, nebulae and other points of interest, it is essential to have a very dark sky, far away from city and small-town lights. Light pollution is probably one of the least talked about issues that we face today. In large cities it’s practically impossible to see any stars because of the city light. With the continual growth of our communities, and even at our observation site, we can see the effect of man-made light on our inability to see celestial objects on the horizon. 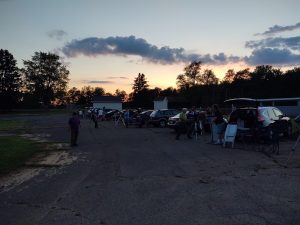 BCACC members at one of their Star Parties held at the Ball Fields in Brady’s Run Park.

We encourage everyone to come to our BCAAC events. There are always plenty of telescopes for viewing, plus knowledgeable members who are eager to answer your questions. Though photos of stars, galaxies, nebulae and planets are readily available online for viewing, the emotion and amazement is the same every time when we see someone look through a telescope for the first time who has never seen Jupiter and its moons, or a distant globular star cluster. At first it’s silence, then they back away from the eyepiece of the telescope in disbelief, and ask, “Is that real?” They quickly drop back down to the eyepiece and the responses differ – some are in awe and some are very vocal as they view it again, trying to comprehend what they have just seen. With others its excitement and words like, “Wow, did you see that?” and “We will be back for this experience again!”

The Star Parties are held at the Ball Fields in Brady’s Run Park. Of course, with COVID we practice social distancing and promote safety throughout the evening. We encourage all ages to attend, and the scheduled events are listed on the sign at the Brady’s Run Park entrance.

There are no member fees or applications, just show up and observe, and soon enough you’ll be considered a valuable member. 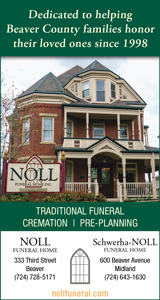