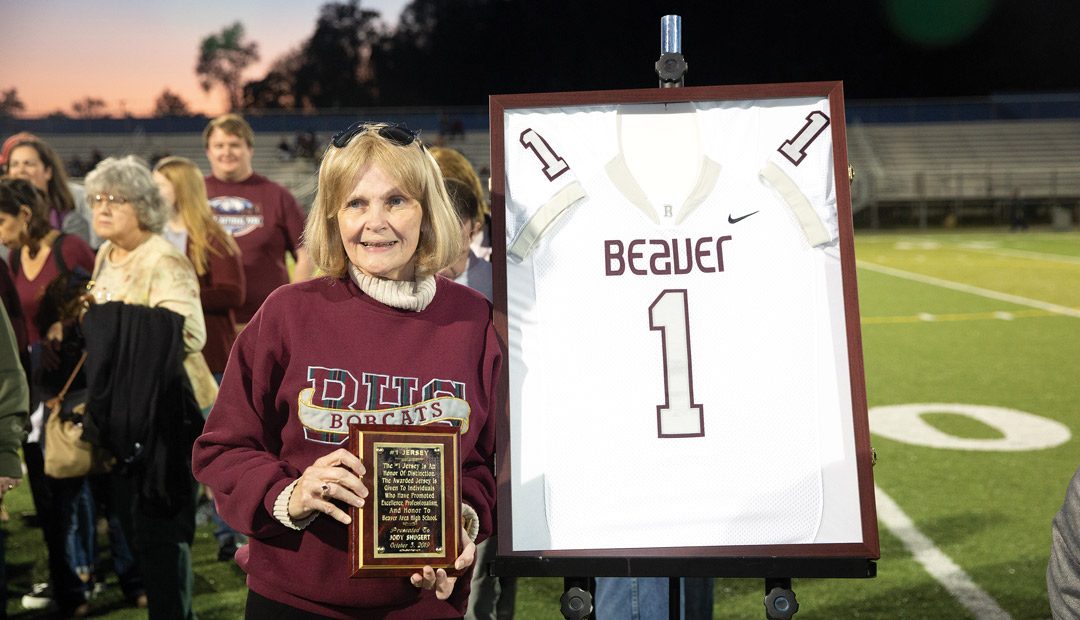 Photo by Beth Spence. Mrs. Shugert before the Homecoming football game on Saturday, October 5, 2019. The plaque she is holding reads: “The #1 Jersey is An Honor of Distinction. The Awarded Jersey Is Given To Individuals Who Have Promoted Excellence, Professionalism, And Honor To Beaver Area High School. Presented To Jody Shugert October 5, 2019”

For nearly thirty-nine years, Mrs. Julia (Jody) Shugert has been making Beaver someplace special as a teacher and mentor at the Beaver Area Middle School and High School. That’s why she was honored with the #1 Jersey at the 2019 Homecoming football game.

The #1 Jersey has been awarded to individuals who have promoted excellence, professionalism, and honor within the Beaver Area School District. Conceived in 2004, the following individuals have been honored for their contributions to the district (no awards were given in 2005, 2006, or 2010):

Mrs. Shugert began her career as a substitute teacher at Beaver Area before being hired as a full-time Reading Specialist and English Language Arts (ELA) teacher in 1985. While she has spent the majority of her career teaching one variation of ELA or another (English 10, Advanced Composition, Humanities, Corrective Reading, Gifted and Developmental Reading, ELA 7 and ELA 8), those who know Mrs. Shugert now might be surprised to learn that she got her start in teaching as a Spanish teacher. Indeed, after studying Spanish at the University of Salamanca in Spain, Mrs. Shugert was hired as a Spanish Instructor at the Community College of Beaver County and at Geneva College before being hired at the Beaver Area School District; but not before chaperoning a Beaver Area Senior High School trip to Mexico in 1980!

Like many teachers before her, Mrs. Shurgert ‘paid her dues’ as a substitute before being hired as a full-time teacher. She was a substitute at many area school districts in the early 1980s including Western Beaver, Riverside, Ambridge, South Side, and Big Beaver Falls.

She even taught a full year of Remedial Reading, Composition, and Speech, as a permanent substitute at Monaca High School.

Armed with degrees from Penn State University (B.S.Ed) and Westminster College (M.S.Ed), Mrs. Shugert began to hone the art and science of teaching at BASD in 1985 and has never stopped learning. In the spirit of a true lifelong learner, Mrs. Shurgert has amassed over 60 credits beyond her Master’s degree and represented the district at prestigious educational symposiums such as the Holocaust Center for Teachers Summer Institute, and she was twice a Fellow for the Western PA Writers’ Project.

While her list of accomplishments is impressive, it is Jody’s unwavering kindness and generosity of spirit toward students, colleagues, and others that makes her so remarkable. Over three decades of correspondence, superintendents captured it this way:

Former BASD Superintendent Dr. Betty Sue Schaughency (1991-2004) once wrote, “You ‘walk the walk’ every day and are such a positive role model for faculty and students with your remarkable attitude, cheerfulness, and faith.”

Mrs. Shugert has worn many hats in the district. She has sponsored the Middle School Student Council, the student newspaper, the Junior High Activities club, the HS Forensics club, Read Across America, and has encouraged scores of students to volunteer for Special Olympics Bowling. During her tenure, Mrs. Shugert has mentored new teachers, including Mrs. Mamone (2005) and Mrs. Wertz (2004), and has served as a cooperating teacher for a Robert Morris University student teacher, Ms. Erin O’Brien (2011). Jody has done much to further the district’s mission, both in inspiring lifelong learners and in cultivating lasting relationships; and she is not done yet.

After having a particularly difficult time finding a club sponsor this year, Mrs. Shugert again stood up to be counted. Writing about Jody’s new sponsorship, this Superintendent, Dr. Carrie Rowe (2006-present), thanked her for her “selfless consideration of what is best for students and willingness to step in and fill the gap with characteristic enthusiasm, expertise,
and care.”

For all of the kindness that Jody has shown over the years; for all of the time and personal sacrifices she has made; and for those acts of generosity that were lovingly carried out without ceremony or recognition, we celebrate Mrs. Jody Shurgert with our highest district honor, the #1 Jersey.