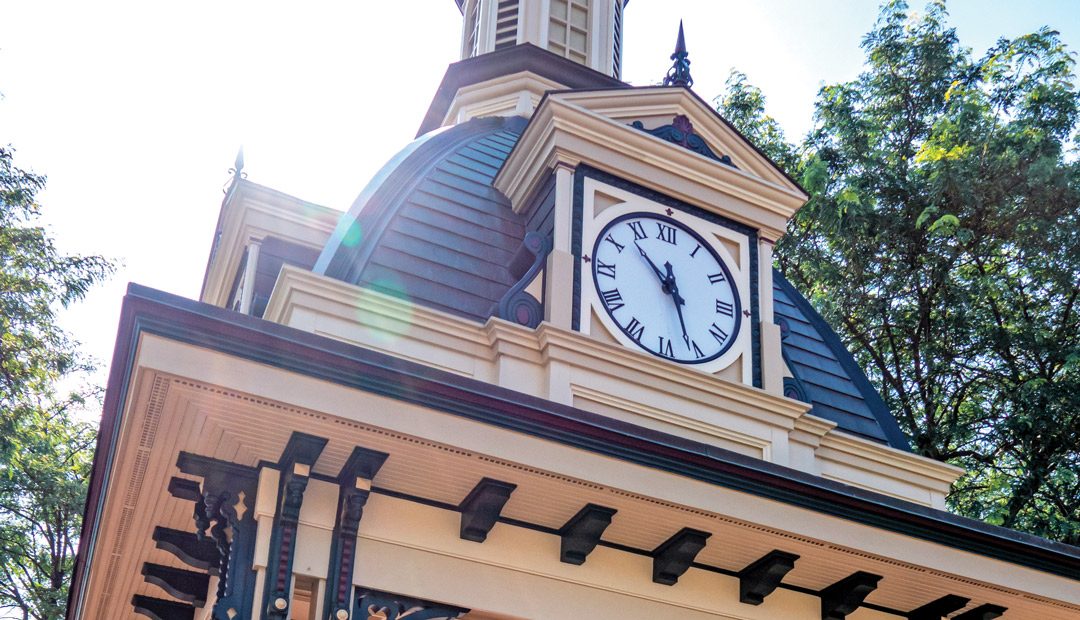 In 2000, Beaver Borough applied for and received a grant for a streetscape project from Community Development Block Grant Funding. This project removed the power lines from the front of the businesses to the back of the businesses, thus allowing for a clean-looking view of the main street of Beaver, Pennsylvania – known as Third Street – with no overhead lines.

One portion of this Streetscape project was the creation of an area in Equibank Plaza featuring the bell from the 1877 Beaver County Courthouse. This bell survived the disastrous courthouse fire of May, 1932. It was placed in the 1933 courthouse and rung by a recorded continuous loop until the demolition of that building in 2001. Embossed on the bell reads “McShane Bell Foundry. Henry McShane & Co. Baltimore, MD. 1878”

A replica of the 1877 Court-house Tower was commissioned to be placed in the Plaza and the bell sits under that replica. This tower was dedicated in a ceremony under the direction of Dr. John Guzzetti on September 22, 2002, followed by a stamp cancellation held at the Beaver Area Heritage Museum that same day.

The base of the platform holding the bell reads on each of its four sides: “A 2,200 pound bell was cast in 1876 and hung in the clock tower of the 1877 Beaver County Court House which has been replicated here”; “In 1935 a disastrous fire collapsed the clock tower the bell was recovered undamaged and rehung in the tower of a rebuilt court house in 1933”; “In 2002 the 1933 court house was leveled and the bell which had tolled the hours for 125 years was placed on this site for all the people to enjoy”; “In grateful recognition of the foresight of the several boards of commissioners who preserved this historic bell for all the people of Beaver County”.

Michael Baker Corporation agreed to underwrite a Carillon musical unit for the Clock Tower and one was found at Bell Industries Digital Carillons of Campbellsville, Ohio. The Westminster Chimes is programmed internally to strike a four note tone at the 1/4 hour, an eight note tone at the 1/2 hour, a 12 note tone at the 3/4 hour and a full 16 note tone at the hour plus strike the bell for the correct time on the hour. This unit was installed and currently plays a hymn on the hour and on the half hour along with the applicable chimes for each of these times. One could program it to play up to 7 hymns at each of these times up to a total of 70 programs. Of course Beaver’s does not play before 10:00 am and after 7:30 pm out of consideration for the citizenry. This programming is handled by two citizens of Beaver who are trained to do this programming.

Recently this Clock Tower was repainted in a striking theme that helps it stand out as the symbol of Beaver.

“Thank you to all who participate in the operation of this tower.” – Midge Sefton