The Streets of Beaver as They Used to Be 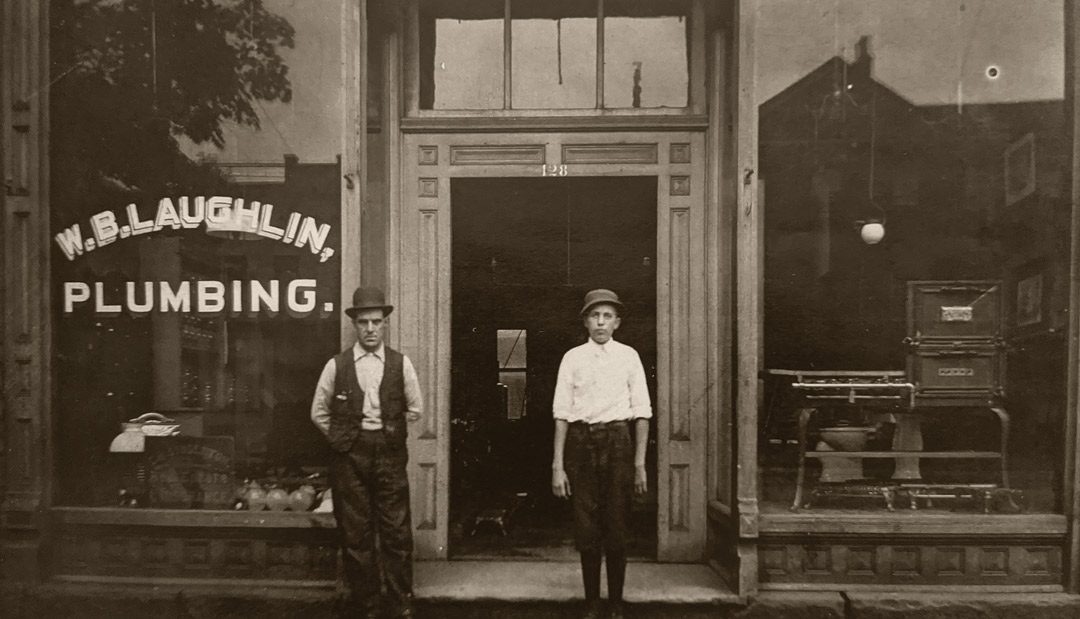 Above: Exterior photo of Myrtle’s family’s plumbing shop, W.B. Laughlin, circa 1905. The plumbing shop was located at 428 Third Street.

Beaver is the place we call home – warm, friendly, familiar. We know the streets and our friends who live on them; the best shops and greatest hangouts, but the cityscape you’ll see today looks very different from the one Myrtle Kindelberger grew up with. Myrtle was born in 1932, before television had replaced the radio and when kick-the-can was still a chief form of entertainment for kids of all ages. Recently, we had the chance to meet this amazing Beaver resident and reminisce with her about her favorite childhood memories.

Myrtle recalled the games she played with friends on Turnpike Street such as red rover, capture the flag, and (of course) kick-the-can. “There were a lot of kids… on Turnpike…” she remembered, “we all played together.” Some of the best days for fun with friends always started at the Beaver Pool. There, Beaver residents enjoyed sunshine, water fun, and snacks from the concession stand – unless, of course, it started to rain like it always seemed to do. “‘Clear the pool! Clear the pool!’” lifeguards would shout, but any time at the Beaver Pool was still “lots of fun,” for everyone.

There were other hangout spots for kids around town, and Myrtle’s favorite by far was the bowling alley on Third Street by far. Several restaurants surrounded the bowling alley, like Peek n Tom’s, where Beaver residents could enjoy fast food with friends and family. Nearby was another business called McCoy’s, and Myrtle stopped there frequently for penny candy, soda, and popsicles. Better yet were the comic books and magazines that lined an entire wall. Myrtle’s favorite comic books were the ones about Superwoman, although Archie comic books made a close second.

Harry Jordan’s Newsstand was another prime location to find comic books, which only cost ten cents at the time. For the same amount, you could also watch a movie at the Beaver Theater. Saturday afternoons were special at the Beaver Theater, which was where Allan Jewelers sits now. There were giveaways, a free matinee for the kids, and a gripping western serial. Myrtle “watched about every movie,” no matter what day it was playing, and her absolute favorite was Gone with the Wind. A regular customer, Myrtle still remembers the day when ticket prices jumped to eleven cents. She described in good humor how the woman selling tickets “wouldn’t trust [her] for a penny,” and made young Myrtle return home for the extra change.

Of course, when Barnhart’s Electric Shop put televisions in their display window, (the first time in Beaver that any business had), everyone watched for free. “Everyone would go and stand to look in the window… at the tv,” Myrtle recalled. At home, radio was the next best thing, and Myrtle listened with a neighbor to Inner Sanctum every Sunday night. Inner Sanctum was a suspenseful radio program that aired from 1941 to 1952. Full of mystery, terror, and morbid, tongue-in-cheek humor, it managed to stand out from other radio programs of the time.

Myrtle also enjoyed lots of dances put on by the school or the town. In 1945, dancing broke out after the surrenders of Germany and Japan that put a stop to World War II. Everyone was “so happy” for the cross continental struggle to be over. The town came alive with music, though Myrtle said she “was too busy dancing to pay attention” to who was playing it.

Five years later, Beaver County was able to celebrate the sesquicentennial away from the shadow of war. To mark the area’s hundred and fiftieth anniversary, Beaver redirected traffic and hosted dances in the street. Festivities continued in the area for a week, and every day focused on a different point of progress for the community. Excitement reached a crescendo on Saturday – two parades, a host of concerts, and a stunning fireworks display closed the county’s anniversary bash.

A few general community activities have changed in Beaver as new traditions are born and others fade away. For instance, when Myrtle was an elementary student, the last day of school was celebrated in a very special way. After students had received their final report card and a small American flag, they marched with the rest of their schoolmates down Third Street in a parade. “I don’t think we made it that far,” she reflected, “maybe just to the courthouse… because we were little.”

Back then, there were two schools in this area for children to attend: Lincoln and Fort Mac Elementary. Students attended Lincoln for grades one through six and then Fort Mac for seventh and eighth before finally entering high school. The two elementary schools had friendly competitions from time to time, as was the case during the scrap metal drive of World War II. Students from both schools worked hard collecting as much metal as they could, and families often made generous sacrifices to help the greater war effort. Myrtle was able to look back in gratitude to her grandfather, who donated both a furnace and a water heater.

The dynamics of Beaver life also changed with the seasons in smaller, regular ways. Winter brought with it a whole host of different activities, from sledding, to ice skating, and more. Every year, the tennis courts in Shaw Park would be intentionally flooded and the water frozen. The smooth surface was perfect for ice skating, and a stove was kept burning in the pavilion for people to keep warm. Even if you didn’t make it to Shaw Park, many kids and teenagers around Beaver would “skate in the street,” according to Myrtle. “The puddles would freeze, and we’d skate on those… where the roads weren’t even… You couldn’t do much, but you could do a little bit.”

From Myrtle’s stories, we’ve gotten to know Beaver and its rich history even better. We’ve also learned how the streets running through it have changed, from the activities we plan in them to the businesses lining either side. Changes will continue to shape Beaver so long as it stays on the map, but some things remain constant. Beaver is still the “nice, beautiful quiet town,” that Myrtle remembers, it is still our home, and it will be for many years to come.