A Tale of Two Brothers 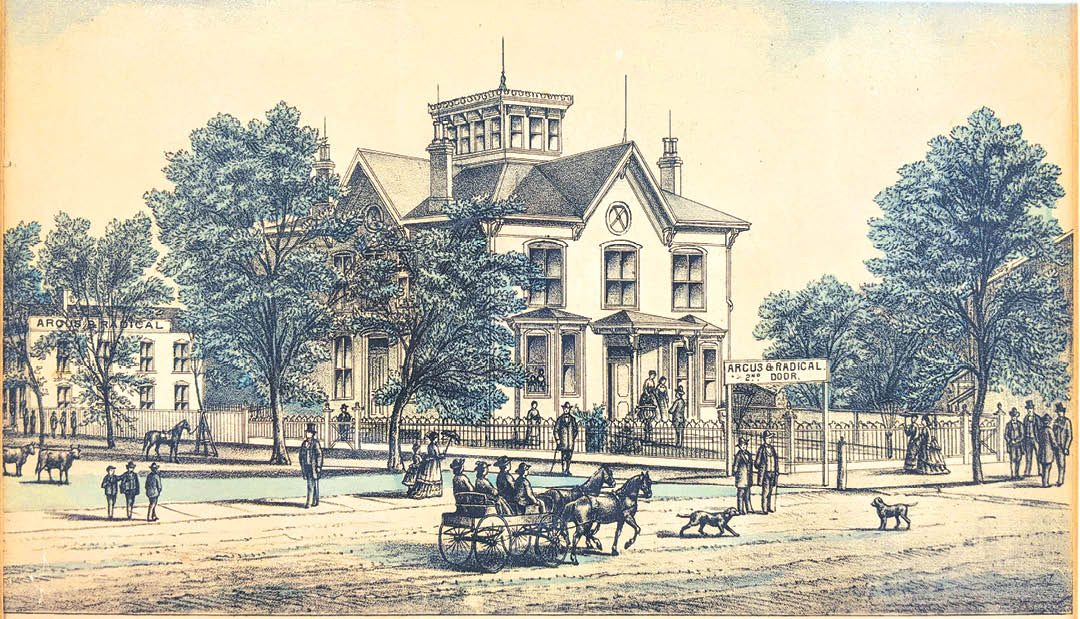 Many families in our borough have deep-rooted connections that go back generations. These ancestors helped build the foundation of the community we know and love today, even though they have long since passed. Brothers and long-time Beaver residents Michael and Jacob Weyand Jr. are two examples of such individuals, and even though it’s been over 100 years since their deaths, their legacies still live on in surprising ways.

Michael was born in Somerset, PA on June 11, 1825 to parents Henry and Magdalene Weyand, both natives of Somerset County and of German descent. When Michael was one years old, his parents moved him and his older brother and sister to a farm in North Beaver township. This area was considered Beaver County back then, but is now Lawrence County. Three years later, Michael’s brother Jacob Weyand Jr., was born.

The boys’ father taught school during the winters, teaching German and English, and devoted his summers to farming. He also served as assessor and constable, and had the contract of carrying mail from the Ohio River Smith’s Ferry by horseback to Enon Valley or to Mt. Jackson. Young Michael and Jacob often helped him with this task.

When Michael was just twelve years old, he began his lifelong career in the printing business. He first served as an apprentice,or a “printer’s devil” with the Intelligencer newspaper in New Castle, PA for a year. This apprenticeship was followed by another at Beaver’s Western Argus in 1838, which lasted four-and- a-half years. During this time, Michael lived at 566 4th St, a home which is still standing today. Michael had to only walk a half block to the Argus from his home, as the publication was located in the parking lot behind Starbucks.

In November, 1851, Michael bought his first stake in a newspaper company. Michael purchased half interest in the Argus.

While Michael was busy becoming a printing master in Beaver, his brother Jacob took more interest in the classroom. He attended Beaver Academy and listened to the preachings of Jacob Baer of the Methodist Episcopal Church, the Westfield Presbyterian Church near Mount Jackson, and the Abolition sentiments of Arthur B. Bradford Enon. In 1850, Jacob moved west to Cincinnati and then to Columbus, Indiana where he worked as a school teacher before becoming a superintendent of a Sunday school.

Jacob moved back to western PA and settled in West Bridgewater after that. He purchased a local bookstore and ran it for a few years before selling his shares. In 1854, the brothers decided to go into business together at the Argus. Jacob purchased the other half of the publication’s shares, becoming Michael’s equal partner. In 1857, Jacob sold his shares to Michael, who worked as the joint and then sole editor there through 1859. By the time he left the Argus, Michael had worked there as an apprentice, journeyman printer, and editor for over twenty years.

Jacob’s next journey took him to Carrollton, Ohio, where he continued his career in print. He purchased a publication called The Free Press but he sold it at the beginning of the Civil War so he could fight for the Union. Jacob raised a company of volunteers of which he became captain. This regiment was attached to the 126th Ohio Infantry.

Jacob fought in many of the battles in which the army of Potomac took part and was wounded twice in battle. He was promoted to Lieutenant-Colonel ranking on March 13th, 1865 for “meritorious services during the war.”

After the war, Jacob returned to Beaver and settled in a home at the corner of 3rd Street and College Avenue. The house is still around today, but it’s standing in a different location. The house was turned and moved to 265 College Avenue.

The two brothers continued serving the community in many capacities. In 1869, Michael was elected to the Beaver town council. From there, he was elected to the Secretary Board of Trustees of Beaver College and Musical Institute, which used to operate where College Square Elementary currently stands.

Though he spent time away from the printing world for a while, Michael found his way back. In April of 1874, Michael established the Beaver Times, a thirty-six column, four-page sheet paper. The Beaver Times was published under the Beaver County Press and for the cost of $2.00 per year, Beaver residents could receive a subscription to the paper owned and edited by Michael. Michael sold the paper in 1898 but continued to edit it until 1900, when he was appointed the Postmaster at Beaver Post Office. The Beaver Times has changed hands and names many times since then, but the paper is still around today, known as the Beaver County Times. Michael passed away in 1910 and is buried in the Beaver Cemetery.

Meanwhile, Jacob returned to his roots of working at the Argus by becoming the publication’s sole proprietor and editor in 1866.

Jacob is remembered as greatly impacting the Argus by greatly increasing its circulation and enlarging the paper itself. In 1873, the Argus combined with another paper, the Radical. The combined paper, the Argus and Radical was run by Jacob until he sold his share in 1879.

With one final transition, Jacob purchased the Enterprise of Beaver Falls in 1880 and changed its name to the Beaver Falls Tribune. He worked there until he retired permanently from newspaper work in 1882. It is written that as an editorial writer he was “forceful, aggressive, and fearless.”

Jacob, like his brother, also served Beaver College as a member of its Board of Trustees for ten years and as its treasurer.

Later in his life, Jacob built a house on Sharon Rd and Leopard Ln – the house was later known as the Kidd House as Jacob sold it to Walter Kidd around 1906.
The Kidd House was torn down in 1997, but you can still find some of its remnants in the community. Volunteers from the Beaver Area Heritage Foundation, like Chuck Copeland, saved some of the house’s materials. It’s front door, for example, now serves as the front door for the Beaver Area Heritage Museum.

Jacob died on February 28, 1913 in Beaver, and is also buried at Beaver Cemetery.

As you walk around the Borough,remember that there are many hidden gems of history waiting to be uncovered. Foundational blocks were laid hundreds of years ago, and we have the opportunity to preserve these while laying our own blocks for the next generations.