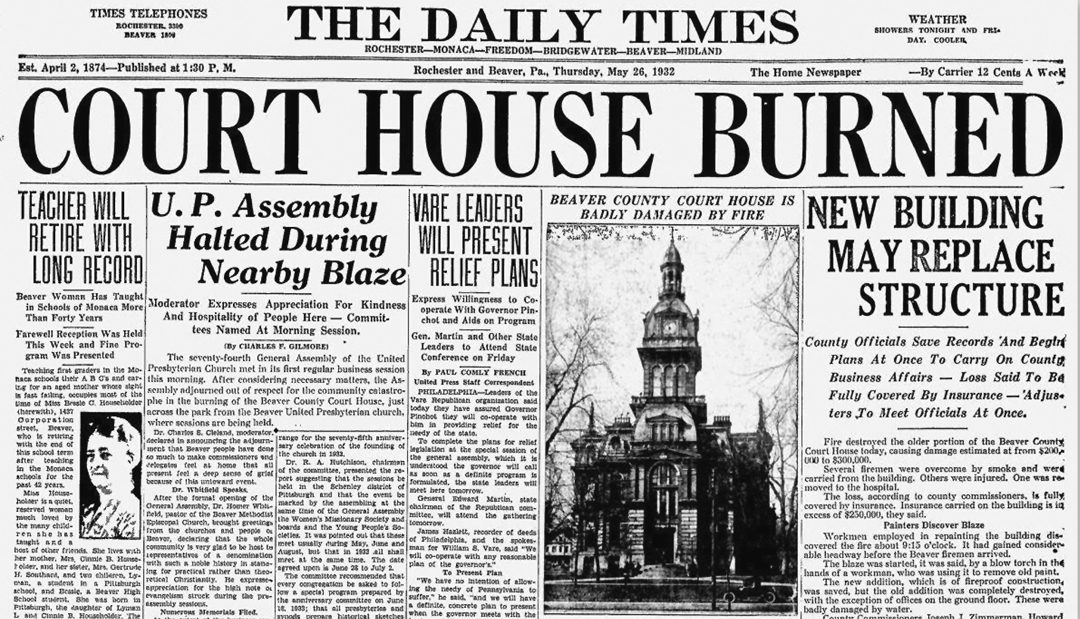 On the morning of May 26, 1932, workers were nearing completion of minor restoration to the Beaver County Court House which included adding a fresh coat of paint. As was the common technique of the day, painters often used blow torches to remove old paint.

This practice would soon meet with disastrous results. As workers removed paint along a metal surface, small cracks allowed the flame to travel underneath to the cornices and ledges. For years these areas had become a favorite nesting ground for birds, building their homes among the dry wooden timbers and rafters.

The stage was set for the third costliest fire in the history of Beaver. (This statistic is strictly from a monetary standpoint, the historical loss of the grand structure can’t be compared to that of the number one and two losses, a lumber yard and furniture store respectively.) It is believed the intense heat from a worker’s blow torch may have ignited one of the many dried nests that quickly spread to the exposed timbers.

Painters immediately saw the danger and tried to extinguish the small blaze. Despite their best efforts to contain the fire, the situation rapidly worsened and the call went out to the Beaver Fire Department. By 9:05 a.m., firefighters had ladders and hoses at the scene. The fire had gained considerable headway and the need for additional help was apparent. Fire companies from Beaver Falls, Bridgewater, Conway, Monaca, New Brighton, Rochester and Rochester Township were called to assist in battling the blaze. Office workers and other volunteers scrambled to remove file cabinets, furniture, and irreplaceable court documents from danger.

It was apparent the blaze had too much of a head start for the firefighters to control despite their best efforts. They were hampered by the height of the roof. Three Beaver Firemen were trapped in a third-floor room shortly after the fire started. C. Dallas Beaner, Verner S. Wahl, and Lawerance B. Leis were over come by smoke and carried from the building. Beaner suffered a badly cut right hand, and Leis a bad cut to his right arm. They were quickly revived by fellow firefighters. Also injured at the fire were Beaver Falls firemen, William Parish, with a minor cut to his hand and Freedom firemen P. Vaughn Gallagher, when a hose connection burst and he was struck in the head as he crossed the street with his wife. He was taken to Rochester Hospital for treatment. Beaver Fire Chief D.A. Moore was directing firemen near the tower and made a narrow escape from serious injury when debris crashed down beside him. By 9:40 a.m., roughly thirty-five minutes after the initial call, the entire building was thick with acrid smoke and the tower ablaze. The clock tower, along with its historic clock, collapsed at about 11:00 a.m. For many years, it had served as a reliable time piece for the local communities in and around Beaver. Just a few years earlier, the clock faces were illuminated so that the hands could be clearly seen at night.

Hundreds of men, women and children came to Beaver that warm spring day to watch the firefighters battle the flames. Beaver police were assisted by Highway Patrolmen and officers from other communities to maintain order and keep the growing number of spectators at a safe distance away from firefighters and their apparatus. The next morning dawned eerily quiet with no clock to mark the hour. Beaver County Official Stenographer, James E. Griffin, captured the black smoldering ruins of the once proud Court House. A tribute to the resilience of the county. In just a few months the new Court House was under construction and finished in 1933, but it lacked the charm and beauty of its predecessor.

A replica of the old clock tower is now the focal point in the middle of Beaver’s business district.