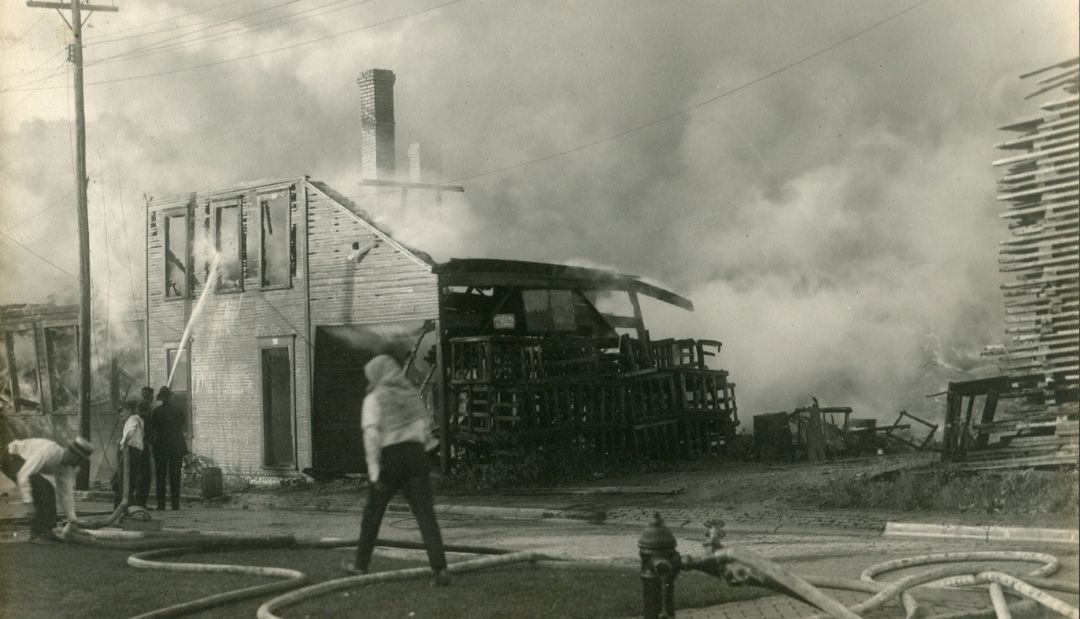 Original story from The Daily Times, forerunner of The Beaver County Times

In 1920 there was no Fourth of July celebration in Beaver. That Monday the whole day was quiet except for the sharp ear wracking explosions of firecrackers. But the day ended in great excitement.

About 6 o’clock in the evening the fire alarm was heard, and the cry arose that the Cook-Anderson Lumber Yard was on fire. People soon were pouring out of their homes and running off to the fire. A man on Fifth Street saw the smoke burst forth from the stable located about in the center of the huge plant and around which were other buildings and large piles of lumber extending in every direction, amounting to some 2,000,000 feet of various grades. The man who discovered the fire saw the great danger and yelled fire, arousing his neighbors. The fire department was summoned, and the truck was sent in haste to the scene. The firemen and volunteers set to work with all their might to arrest the fire which was spreading in all directions amongst the dry fuel. Quickly a line of hose was laid from the plug at the corner of Canal and Insurance Streets, and a stream was playing on the fire from another corner, and other lines were laid.

But despite all efforts to check the flames, the fire continued to spread rapidly and become more intense and threatening. Calls were sent to fire departments of all valley towns, and in response trucks soon began to arrive from Bridgewater, Monaca, Rochester, Freedom, New Brighton and Beaver Falls, and streams from all the plugs within reach were soon playing on the fire. It was realized that nothing could save the office building on Fifth Street at the Northeast corner of the plant, and rescuers broke into the building and carried away plans and papers.

The homes on College Avenue adjoining the plant were in great danger, and the occupants and others were busy carrying to safety articles of value and furniture. The crowd was dense and required policeman to rope off the approaches to the fire, especially as if became known that 500 gallons of gasoline were stored in a tank underground and was liable to go off at any time. Fortunately, this gasoline was deeply buried that it escaped.

Beaver’s volunteers, aided by other nearby departments, poured water from 21 lines of hose into the raging fire for 24 hours before bringing the flames to a halt. The lumber company, covering an area as large as a city block, was destroyed but all the surrounding homes were saved. Damage was estimated at $250,000,00.