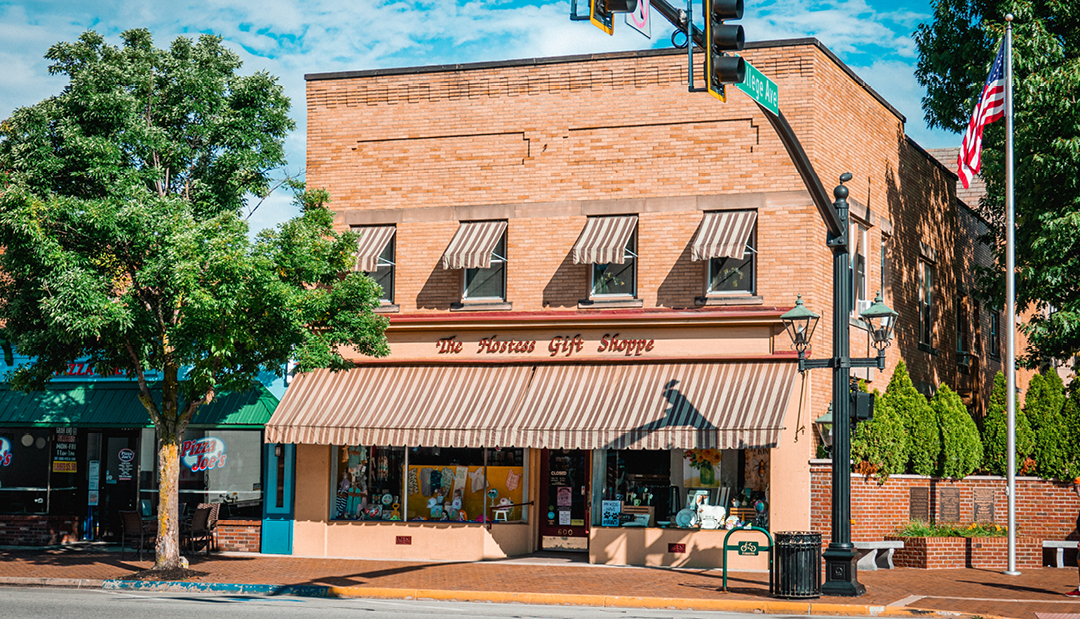 One of the fixtures of Beaver’s Third Street business district over the past nearly 50 years has been the two-story, yellow-brick Hostess Gift Shoppe at the corner of College Avenue in the center of town.

Owned and operated today by the husband-and-wife team of Stephanie and Keith Sevy, the Hostess Shoppe provides customers with a wide variety of greeting cards, candles, picture frames, stationery, and other collectibles and gifts.

The Sevys do business the truly old-fashioned way, with high-quality merchandise, a deep commitment to customer relationships and care, and personal involvement in the community. They’ve done so without relying on such otherwise 21st century tools as a website and active social media.

“We still believe there’s a niche for our type of service,” Keith says, and it’s the “community that has kept us in business.”

Stephanie and Keith provide additional value to shoppers through such perks as free gift-wrapping and boxing. At times they have featured local authors by making copies of their books available for sale.

The business has been so popular that in 2016, the Beaver County Times published a feature story headlined “Despite ever-changing communication, Hostess Gift Shoppe stays true to its past.”

One of the observations that has made an impact on Keith is the many family generations that the store has served–from grandparents in older days to children and now grandchildren.

“They grow up, graduate, get married and move away,” he says, “and then they move back. People return all the time–we hear about it almost every other day. Beaver is safe, clean, well-managed, has great parks, and wonderful people. It’s a hometown community, and everybody knows your name.”

One of the extracurricular ways the Sevys have added to the spirit of Beaver has been through work on the Downtown Beaver Chamber of Commerce over the span of 35 continuous years. Through such past and present events such as Hawaiian Days, Sidewalk Sale Days, Trash to Treasures, and now the Hot Summer Nights Car Cruise, they have helped promote the town wherever possible.

The first Car Cruise was almost the last. Held in September 1989, it attracted 30 vintage car owners. But the timing coincided with Hurricane Hugo which wreaked weather havoc all along the eastern seaboard. Despite the cold, rainy misery, Keith and others realized there was enough enthusiasm and support to try again the next year. And it’s continued ever since.

“The Borough has always been 100 percent supportive of the local Chamber activities,” Keith says.

The story of how Stephanie and Keith became owners of the Hostess Shoppe is unusual. Keith’s grandparents had owned Sevy’s Luncheon in Beaver on the corner site where Allan Jewelers sits today. When Keith’s grandfather died in about 1973, the luncheonette was closed, and Keith’s mother Lois Sevy was persuaded to move down the block and begin a small party-planning business in the current Hostess Shoppe building, thinking there was a need for that service.

While party planning ultimately did not pan out, Keith’s mother quickly shifted the focus of the store to selling gift merchandise. Stephanie, a college student who was dating Keith at the time, was hired as an intern. She has remained ever since.

Keith himself did not become seriously involved until the 1980s, when health issues forced him to give up his work as a master electrician at Crucible Steel in Midland.

With a look ahead, the year 2023 will mark the couple’s 50th year of business. They’ve always been in their yellow-brick landmark building, which earlier housed the Atlantic and Pacific Tea Company (A&P grocery store) and Hartung’s Shoe Store, dating to the early 1900s.

Why not stop by sometime and wish the Sevys a hearty congratulations?