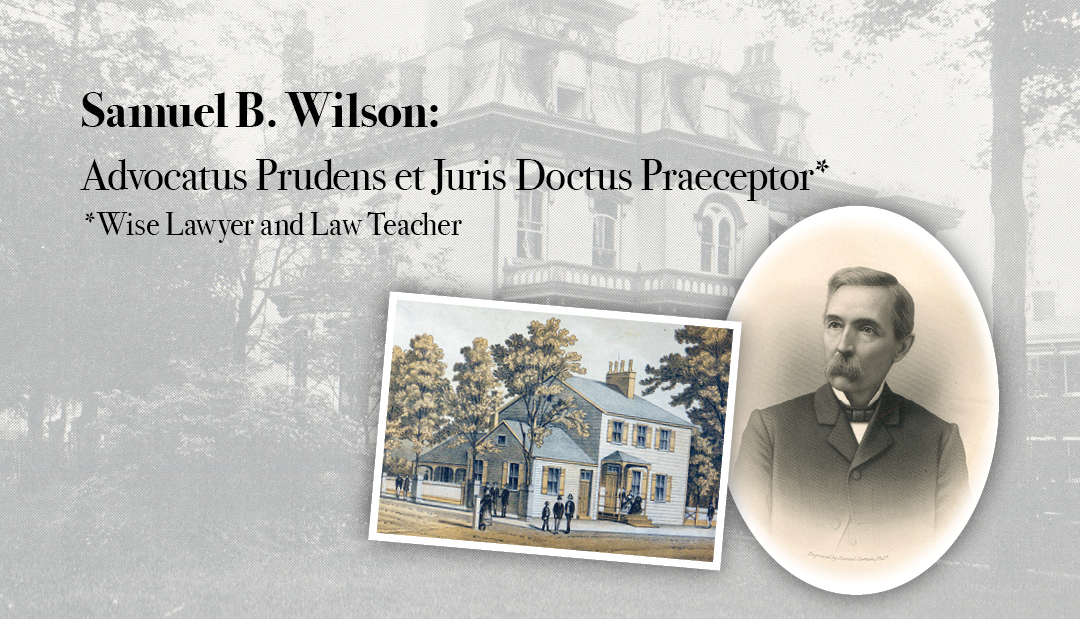 Visitors to the Beaver Farmer’s Market no doubt pass by a small gray frame house each Saturday morning at the corner of Market and Turnpike Streets. But most people likely do not know that this modest structure served as the longest continually running law office in the state during the 19th and 20th centuries. Its most well- known occupant was Beaver lawyer Samuel Beatty Wilson (known as Sam B.), whose family maintained possession of the property until the mid- 1970s. Sam B.’s grandson and namesake practiced law there until shortly before his death in 1972. An engraving of the building was featured in Caldwell’s Illustrated Historical Centennial Atlas of Beaver County, published in 1876.

The original Sam B. Wilson was born on a farm near what was to become New Wilmington, PA on February 20, 1824, the son of Patrick and Rebecca Morehead Wilson. A good student and natural learner, he went on to study at Jefferson College (now Washington and Jefferson College) in Canonsburg, PA. During his senior year in 1848, he and five other male students formed a Greek letter fraternity for men, Phi Delta Gamma, known informally today throughout the Greek system as the Fiji fraternity. As a founding member of Phi Gamma Delta, Sam B. Wilson has an honored place in the fraternity’s history, as authored by William Parrish. A former Phi Gamma Delta historian, William Chamberlain, visited the grave sites of the founding members in the early years of the 20th century, and his research provided interesting details on their lives, work, and continued communication with one another through the years. Much of what we know of the life of Sam B. Wilson comes not only from his descendants, some of whom still live in Beaver, but also from letters between Wilson and his fraternity brothers.

Wilson’s scholarship was evident to his classmates at Jefferson College, but his continued interest in languages and education persisted throughout his lifetime.

Proficient in English, Greek, and Latin, Wilson (like many of his peers during this time) was the product of a classical education. According to Parrish, Wilson was known in college as a “thorough master of the English language, whose bold and withering attacks in the Franklin Literary Society would keep critics silent.” His debating skills would serve him well in his later legal career. Wilson’s personal library in Beaver was well known among residents and members of the legal community. His son George recalled that family mealtimes were characterized by grammatical debate and lively discussion.

Following his graduation, Wilson became a teacher in Darlington, PA, but he quickly realized that law was his true calling. In the fall of 1849, he went to Somerset, PA to study law with the Honorable Jeremiah S. Black, who was a good friend and later a member of President Buchanon’s cabinet. In 1850, Wilson was admitted to the PA bar and on November 18, 1850, he was admitted to practice in several courts in Beaver County. Wilson came to Beaver to begin his legal career, and his brother Marmaduke Wilson and his wife were already established on a farm in Beaver. Sam Wilson married Elizabeth Robinson in 1854 and his wife became his legal secretary. The couple lived and worked out of the small frame house on the corner of Market and Turnpike Streets and raised their four children there. Toward the end of his life.

Sam B. was able to purchase Matthew Stanley Quay’s house on Insurance Street that eventually became the Colonial Apartments, where now stands a new brick condominium building across from Quay Park. Sam B.’s widow, Elizabeth, continued to live in that residence until her death in 1920.

Sam B. mentored many young lawyers during his lifetime, just as he had been mentored by Judge Black. Among those who benefited from Wilson’s tutelage were Wilson’s nephew Frank, Edward Black Daugherty (who at one time was a partner in Wilson’s law office), E.P. Kuhn, Elias Bigger, and others. Wilson was a longtime friend of Lewis Taylor, one of the most prominent criminal lawyers in the state and a leader of the bar in Lawrence County. Wilson remained a prominent Beaver civic leader throughout his life. He was one of the incorporators of the Beaver Cemetery and served on the Cemetery Board of Managers until his death. During the 1880’s, Wilson’s Sam B.’s gravestone in the Beaver Cemetery health deteriorated, and he died on January 17, 1889. When Phi Gamma Delta historian William Chamberlain visited Beaver in 1908, he requested that Wilson’s family agree to allow him to inscribe Wilson’s tombstone with the epitaph “One of the Founders and the First President of Phi Gamma Delta.” Wilson’s memorial in the Beaver Cemetery is situated near some of his many friends, including Lewis Taylor and former PA State Senator, Matthew Quay.